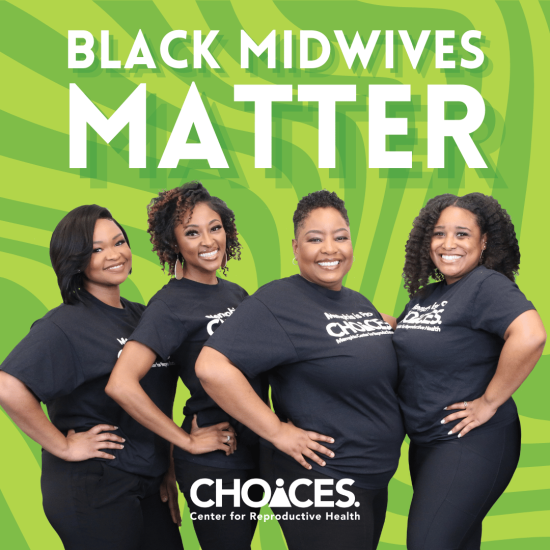 Until the mid-20th century, Black midwives, especially in southern regions, were the primary health care providers for Black, Indigenous, immigrant, and white pregnant people alike. Black midwives, also called “Granny midwives,'' were enslaved women and community healers who utilized many techniques and practices passed down from generation to generation, which could be traced back to many parts of Africa. Granny midwives were essential to the health and wellbeing of their communities. They not only provided obstetric care to pregnant people, but also provided many other reproductive and medical health services, including abortions.

The number of Black midwives across the nation began to dwindle in the early 20th century. A national smear campaign organized by the public health, social welfare, and obstetric community stereotyped Black midwives as unclean, uneducated, and dangerous. Childbirth began to be seen as a medicalized procedure rather than a natural phenomenon. Physicians, predominantly white wealthy males, emerged as the primary care providers. Hospitals were seen as places that were safe, hygienic, and clean environments to deliver a child compared to having a child a home. Although intensive research in the 1930s revealed that better birth outcomes were achieved by midwives compared to physicians, Black midwives were blamed for the nation’s mortality rates. The combination of negative messaging campaigns and the passing of new laws and policies regulating the practice of medicine and who could provide services like attending childbirth resulted in only fifteen percent of babies being delivered by a midwife by 1930. The ramifications of their absence in the communities across the nation can be seen today.

Today, people of color experience worse health outcomes than white patients. Compared to white pregnant people, Black pregnant people are four times or more likely to die from pregnancy-related causes. Specifically, even when Black pregnant people’s socioeconomic, marital, and educational levels are higher compared to white pregnant people, the risk of experiencing a negative outcome during pregnancy is still great. Studies show that people who choose a midwife as their care provider during pregnancy and childbirth experience lower numbers of medical  interventions and better outcomes for both birthing patient and baby. Moreover, several studies confirm that among low-risk pregnant people, planned home births result in low rates of interventions without an increase in adverse outcomes for both pregnant person and baby. While the rate of out-of-hospital births have increased significantly in the last 50 years, from 0.3 percent in 1975 to a little less than 2 percent of all births today, Black pregnant people are still primarily delivering in hospitals.

Presently, Tennessee matches the national rate of nearly twice the number of Black infants dying in comparison to white infants. Many studies show that states that had integrated midwifery care, where midwives and traditional healthcare providers engage in inter-professional collaboration, were associated with significantly higher rates of physiologic birth, fewer obstetric interventions, and fewer adverse neonatal outcomes. Overall, the more included midwives are in the prenatal and postpartum process, the better the health outcomes for pregnant people and their babies.

CHOICES: Memphis Center for Reproductive Health seeks to do its part by not only increasing the number of Black midwives who are exposed to the full spectrum of sexual and reproductive health services in the South, but to give all pregnant people options to choose which type of care is best for them.

CHOICES was founded in 1974 - we've been a trusted provider of patient-centered medical care in the Mid-South for almost 50 years. CHOICES provides a full spectrum reproductive and sexual health practice with a range of services for more than 4,000 patients each year. Many patients are un- or under-insured and receive outside funding to assist with the cost of medical services provided. Services include medication and procedural abortions, perinatal care and out-of-hospital birth, gender-affirming hormone management, HIV testing and prevention, birth control, and sexual wellness. CHOICES is the only independent abortion provider in Memphis, Tennessee. With the opening of its new health and birth center in September 2020, CHOICES became the first nonprofit health care provider in the country to offer both birth services and abortion care under one roof. Grounded in the principles of reproductive justice, CHOICES centers those with the least access to quality, affordable, inclusive care. To learn more about our patient demographics, please review CHOICES 2020 Annual Report.

The Center of Excellence Nurse-Midwifery Fellowship Program at CHOICES: Center for Reproductive Health seeks to not only introduce recently graduated nurse-midwives to CHOICES’ values and the full spectrum of reproductive health model and services but to align each fellow with reproductive and social justice principles. CHOICES hopes that each fellow will leave the program fully equipped to practice and care in a more inclusive, patient-centered way and take action to dismantle all systems of reproductive oppression and injustices in their very own community and beyond.

The Fellowship is set to begin February 2023 with a 12- month commitment. Two applicants will be accepted every year. Each fellow will receive a salary of $85,000 and a travel reimbursement of $3,000. As a nurse-midwifery fellow, you will be considered a full-time employee who is eligible to participate in the CHOICES’ major medical, vision, dental, and group life insurance coverage. After 6 months of employment, you will be eligible to participate in CHOICES 401k retirement plan and receive up to a 2% salary match as well as 10 days of paid sick leave, 15 days of paid vacation leave, and 10 paid holidays annually.

Dr. Nikia Grayson (DNP, MPH, CNM, FNP) (she/her)  is a public health activist, anthropologist, and certified nurse-midwife who has devoted her life to serving and empowering people in underserved and marginalized communities. Nikia has more than 10 years of experience working in public health, with her more recent work focusing on reproductive rights, birth justice, and midwifery. She is passionate about ensuring all persons have the rights and means to make decisions regarding their sexual and reproductive health.

Kemetra King (CNM) (she/her)  is a certified nurse-midwife with over 10 years of women’s health nursing experience.  She has a master’s in nursing education and taught nursing at a collegiate level for six years.  Most recently she received a second master’s of nursing in midwifery. She is devoted to the field of women’s health and is especially passionate about working with underserved populations. Kemetra is committed to providing compassionate care for her patients, and to advocate for women and their families throughout their lifespan.

Talita Oseguera  (CNM, WHNP-BC) (she/her)  is a certified nurse-midwife and reproductive justice advocate. She has a background in community-based health care centered on equity and the advancement of historically marginalized groups, empowerment of women, and partnership with families. She has been a full-spectrum doula since 2013 and has devoted her professional and academic career to both birth and research justice. Talita is committed to improving reproductive justice, honoring and amplifying the voices, experiences, and issues of Black women and individuals across the sexual, reproductive and perinatal continuum, moving alongside birth workers of color who reflect the communities they serve, improving care for and with Black women and individuals, and keeping birth sacred.

Alexius Murrell (she/her) is a native of Memphis, TN, a Central High School graduate, and has spent time studying at the University of Memphis.  She is currently enrolled in the Southwest Community College Nursing program.  Alexius is a DONA (Doulas of North America) trained birth doula and CHOICES’ Birth Assistant. She is married and a full-time mother to her four-year-old daughter Chloie. She enjoys birth work and all things nurturing. Her favorite pastime is enjoying ice cream with her family on Sundays. As she transpires through her journey in the birth world she is ecstatic about her path to becoming a Certified Nurse Midwife.

Marina Nsonso (she/her) is a Midwifery Coordinator at CHOICES. Marina is a native of Tanzania/Kenya where she was a nurse midwife. Marina brings a wealth of knowledge to her position and loves supporting and educating patients. Marina is the mother of two beautiful girls. When she is not working, she loves listening to the news, cooking, gardening, and weightlifting.

Maria Haley (she/her) is one of CHOICES Midwifery Coordinators. Maria provides translation services for Spanish speaking patients and helps connect patients to other services they may need. Maria’s favorite part of her job is providing “moral support for our patients; my quest in life is to empower others.” Outside of work, Maria enjoys biking, cooking, Bikram yoga, traveling and volunteering.

CHOICE's overall objective of the fellowship program is to ensure each fellow is equipped to practice and care in a more inclusive, patient-centered way and to take action to dismantle all systems of reproductive oppression and injustices in their own community and beyond. The Center of Excellence Nurse-Midwifery Fellowship Program consists of five unique pillars.

To apply, please email the following materials to Jazlyn Christie, Human Resources Coordinator, at jchristie@yourchoices.org. The application deadline is Friday, October 28th. Please indicate clearly that you are applying for The Center of Excellence Nurse-Midwifery Fellowship Program.

Please contact Chastity Mays, if you have any questions or concerns at cmays@yourchoices.org.

Click here for more information about our birth center and midwifery services.

CHOICES does not discriminate against any person on the basis of race, age, gender identity or expression, sexual orientation, body size, religion, parental status, disability, or any characteristic protected by law. Please report any instances of discrimination at CHOICES by calling our Patient Success Manager at 901-274-3550 ext 214.